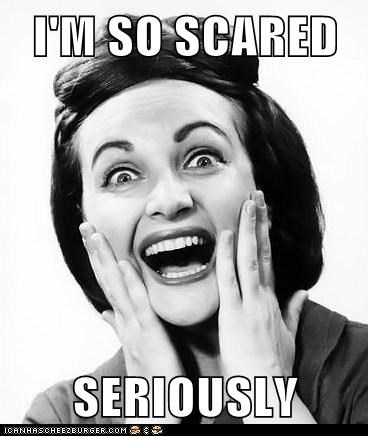 The internet has a mild explosion every time Facebook announces a change to its terms of service.  The shockwaves are just now creeping out with questionable articles and scary exposes bemoaning the upcoming changes and a slew of people posting those bogus copyright or privacy notices because they think those matter.  Bogus notices which I blogged about two years ago–a fun little post called You Owe Me $2 For Reading This Blog Post Title (And The Three Signs Of A Social Hoax)–but are still going around.

But what there hasn’t been too much of is an actual comparison of the differences with the old Facebook terms and the new ones.  Because that would be rational and probably not get many clicks.  All the current articles seem to take for granted that the current/old Facebook terms are fine–but change is SCARY!

So here, in the closest way I can be not rational and get lots of clicks, even though it doesn’t matter since I don’t put ads on this site  (wordpress may because I have the free service), is my fear-laden analysis of the actual section-by-section changes to the Facebook terms.  If you want to check yourself here’s a link to the old (or current) terms and the new terms that go into effect in January 2015.  Otherwise, just trust in me and BE AFRAID!!!

Facebook doesn’t have a Privacy Policy–did you know that?  No, that isn’t a change with the new terms–they haven’t had one in years.  Instead they’ve had a Data Use Policy.  Which is actually a better name for what the policy covers anyway.  But now the policy will be called the Data Policy.  The word “Use” has been obliterated, it’s a whole new world of darkness and evil!

Oh, that’s the only change to the Privacy section.  Try to quell your horror and move on to section 2.

If that one change in the Privacy section didn’t terrify you then surely the two, yes TWO changes to the content sharing section will make you crawl under the bed and Instagram scary flashlight pictures all night.

Change 2: the word “them” has been changed to “your feedback or suggestions” in the fifth item. Which is what “them” referred to anyway only now it’s clearer.

Steal your heart and move on to the next block.

The ninth item (“You will follow our Promotions Guidelines and all applicable laws if you publicize or offer any contest, giveaway, or sweepstakes (‘promotion’) on Facebook.”) has been removed.  It’s like they don’t even want us to be safe anymore!  Or it’s like they moved it to another page and link it later.  Either way: EVIL!

Registering is when Facebook first sinks its evil tentacles into your personal information and account security is how you keep your own account out of the hands of other people.  So it should surprise nobody that Facebook took this entire section and did nothing at all with it whatsoever.  My goodness, does their evilness know no boundaries?  They’re like a Sbarro restaurant to your lower intestine–pure, fast-moving evil!

The old version mentioned how you couldn’t use Facebook trademarks except as provided in a Brand Use Guideline and it gave examples of what those trademarks were.  Now it doesn’t give examples of Facebook marks.  AT ALL.  Except it makes Trademarks a defined term and gives the examples near the bottom of the document.  THE BOTTOM.  Dracula himself couldn’t be scarier if he was in High School Musical 6: No More Mirrors!

6. Mobile and Other Devices

We all know how important mobile devices are to Facebook users and the company.  Knowing that, can you guess what they did with this section?  NOTHING!  It’s like the moment when the full moon comes out and the guy turns into a werewolf.  Except there’s no moon and no werewolf.  Run!

This section used to force you into the draconian and horrible Facebook payment terms–terms so horrific I dare only utter their name and make several hand-wards to keep the demons away.  The new terms say that you will still be subjected to them–unless other terms are listed and then those apply.  And those terms could be…better?  No, they will be worse!  They will demand your unborn baby and require you to listen to Justin Bieber music non-stop for months!  How dare those…other payment providers besides Facebook make other terms available to you when buying things!

8. Special Provisions Applicable to Developers/Operators of Applications and Websites

This section links to special provisions that were totally in the same document before–you didn’t even have to click last time but NOW YOU DO!  Oh, and they combined this with providers of social plug-ins as well, just to MAKE THINGS SIMPLER/EVILER FOR YOU!

Oh yeah, here’s the beefy stuff.  Because we all know that Facebook wants all your data to sell to people so that you’ll buy Snuggies and knock-off Legos and flavor injection kits that totally DO NOT INJECT FLAVOR NO MATTER HOW MUCH TERIYAKI SAUCE YOU USE!  (ahem)

Do you put ads on Facebook, you evil bastard?  Then you should know these terms have moved to their own document!  And that document is totally possessed by an evil doll who wants to steal half your socks.  Not all your socks, just one of each pair.  I hate those dolls.

BAM!  Oh, just when you were lulled into a false sense of security, Facebook done Amendment changed you, son!  And do you know what they did?  Do you know what they did?  Why, they clarified when they may make changes to the terms but still said they’ll give you notice!  That’s like McRib evil right there.  They even took away the seven day requirement for posting changes to the terms meaning they could totally post term changes MORE THAN SEVEN DAYS AHEAD OF TIME!  Not like they’ll ever do that though.  I mean, it’s not like we’re analyzing term changes four weeks before they go into effect.

Wait, we are?  THAT’S HORRIFYING!  This is like the BuzzFeed list of 13 Kittens Who Are So Scaredy-Cat They Cannot Even Handle Right Now!

This is the section that says what part of the terms would still apply even if you don’t use Facebook anymore.  And they made LESS terms still apply.  If that isn’t the legal equivalent of the Alien chest burster, I don’t know what is…shudder.

But what if you have a disagreement with Facebook?  This is where they totally take advantage of you, right?  You bet they do.  And they do that by changing a typo (it said “or” when they meant to say “of”) and they also changed three instances where the limitation only said HIS or HIM and changed it to HIS OR HER or HIM OR HER.  Wait, so these terms apply to women now too?  What is this, Facebook, the women’s suffrage movement of the 1910’s?  Because time travel is scary or something.

16. Special Provisions Applicable to Users Outside the United States

People outside the US don’t get to use Facebook anymore.  Oh wait, that was an early draft.  NO CHANGES?!?!  Why, the implications of this are staggering.  Has anyone told Kim Kardashian yet?  She may need to delete her Facebook page in protest!

There are so many changes here I can’t even begin to list them.  Actually, there are four and they’re boring.  Kinda like the Blob.  Maybe a long time ago that was scary but now I’m just eating popcorn and waiting for The Fly to start.

Obviously Facebook has saved the best for last.  Other is the giant catch-all, the monster cornucopia of platform terms and conditions that lets the giant corporation eat your toes and drain your bank account.  So it should come as no surprise that Facebook changed NOTHING  here.  Because that’s how evil they are: pure evil.  Like pure maple syrup if maple syrup was evil.  Which is crazy talk because maple syrup is pure goodness.

And…that’s it.  My goodness, I’m surprised we made it through all of that.  I believe the only rational response is to post a status update about the Burner convention and then delete our Facebook accounts.  Instead let’s go over to WhatsApp.  I hear the guys that run that app are super cool.